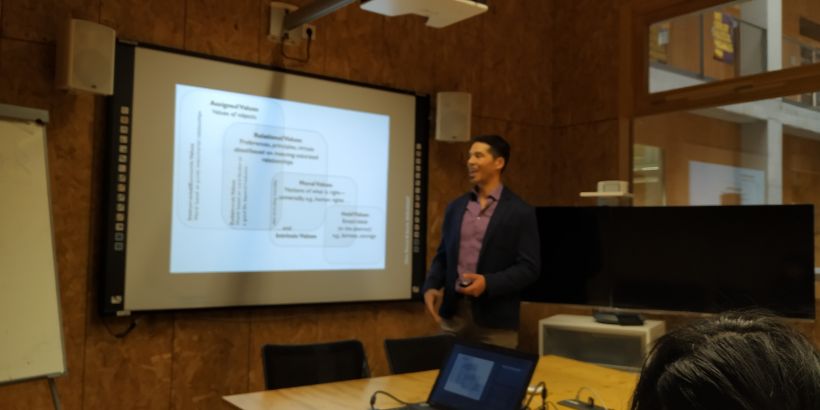 On December 10th 2019, Prof. Kai Chan from the University of British Columbia Canada followed our invitation to Barcelona to discuss the relevance and new pathways of studying relational values for sustainable transformations. Kai Chan is one of the leading scholars on relational values, not least in the context of the Intergovernmental Science-Policy Platform on Biodiversity and Ecosystem Services (IPBES). Building on his work, the workshop aimed at exploring new fields of application of the relational values approach in social-ecological systems research.

Environmental science and policy have long focused - and argued about - the dichotomy of intrinsic and utilitarian motivations for protecting nature. Yet, as Chan argues it is especially emotional and cultural ties with nature, referred to as relational values that promote environmental stewardship. Relational values understood as the preferences, principles, virtues and emotions are often interwoven with intrinsic and utilitarian nature values and may thus bridge the two competing concepts. But relational values do also constitute a relevant value category on their own, and an important entry point for the social sciences to understand and value nature’s contributions to human wellbeing, for example through social cohesion, place making and place attachment, identity and traditional knowledge systems. Together with Kai Chan we discussed three innovative lines of research and research needs with regard to relational values in the face of global sustainable transformations: First, the importance of relational values in and outside of market systems; second, the relevance of relational values in the face of ecosystem service justice and conflict; and third, the importance of social media in the digital co-construction of relational values through virtual communities.

The discussion was triggered by a pitch presentation by Sam Bliss who posed the research hypothesizes that production and sharing without markets fosters non-instrumental relational values, whereas production for sale and market transactions tend to instrumentalize people's relationships to each other and to non-humans. During the discussion involving Laura Calvet-Mir an expert on small scale agriculture, it has been highlighted that not only non-market systems rely on relational values but many market systems partially as well. This is for example true for traditional farming systems, which are not “competitive” from a strictly market perspective but which still function due to cultural heritage and other relational values tying people to agricultural practices. These relational values are under threat by utilitarian efficiency argumentations, which for example the European Union primarily follows in its Common Agriculture Policies and which has strongly subsidized abandonment and intensification of traditional agriculture – and thus the loss of relational values. Interestingly, post-communist and feminist critiques have also argued for the need to internalize non-utility oriented work into markets; this however, the group discussion indicated, should be done with care since it might also cause relational values to lose their meaning.

This block was inspired by Ksenija Hanacek’s PhD- thesis and the defence that had taken place one day before the workshop (with Kai Chan among the tribunal members). The thesis argues that relational values are often overlooked in environmental conflict, while their recognition might help solving conflict at a latent stage before leading to social upraise and struggle. Along these lines, the sub-group led by Amalia Calderón-Argelich and Stefania Benetti started to develop a conceptual framework that considers the recognition of relational values, alongside intrinsic and the utility values as the core for a coherent ecosystem services justice framework. Under consideration of established environmental justice dimensions (recognition, procedure and distribution), the further application of this framework to an extended ecosystem services and justice literature review has been discussed as one of the potential steps forward. The development of this conceptual framework can provide new tools to project and fine-tune justice consideration in ecosystem services assessments, while highlighting current gaps in this field.

Last not least, the idea of social media as digital spaces for the co-construction of relational values was introduced by Fulvia Calcagni (along the lines of her recent publication[1]). Virtual communities are hubs for people to communicate worries for, perceptions of and interactions with nature in a multimedia manner (e.g. through photos, tags, texts, etc.). And it is within virtual communities that relational values between people and nature, and of people in nature are shared and multiplied across space and time, at unprecedented scales and rates. It has been argued that the maintenance of relational values is critical to counteract the “extinction of experiences” of nature, inherent to an ever more urban global society. Moreover, it has been hypothesized that co-construction of relational values can even take place without people’s direct interaction with nature. Thus, virtual communities could be a cornerstone for sustainable global transitions, in which the value of nature is taken up. However, from a relational values research perspective we are only at the very beginning of the assessment and interpretation of the digital traces of peoples attachments, commitments, responsibilities and positive relationships with and within nature. Two key biases need to be understood to properly use social media data in relational value assessments. First the ‘interpretation bias’, referring to the researcher’s (mis-)interpretation of data, which is generally abundant but only provides shallow information (such as tags) or is difficult to interpret objectively (for example pictures). Second the ‘representation bias’, referring both to demographic biases in virtual communities as well as specific activities and virtues that are more likely to be shared on social media than others.

Many thanks to all workshop participants, and a special thanks to Kai Chan for visiting us at ICTA-UAB and sharing his thoughtful insights.